Skip to content
This is It by Michael Jackson out on DVD
This is It-starring Michael Jackson is out on DVD and has become one of the top best-selling item om Amazon. Directed by Kenny Ortega, This is It captures 121 minutes of extraordinary footage of Jackson’s life. The DVD features edits from 120 hours of reharsal footage of Michael Jackson’s career. His unexpected death in 2009 made numeours of his fans sad. The DVD will some relief and some thrill as we the legend on screen performing his best.

Michael Jackson: This Is It 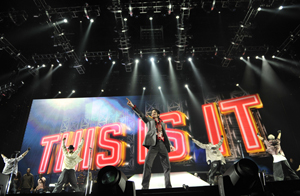 SEE THE EVENT OF A LIFETIME AT THEATERS – LOOK FOR IT SOON ON DVD AND BLU-RAY. Michael Jackson’s This Is It will offer Jackson fans and music lovers worldwide a rare, behind-the-scenes look at the performer as he developed, created and rehearsed for his sold-out concerts that would have taken place beginning this summer in London’s O2 Arena. Chronicling the months from April through June 2009, the film is produced with the full support of the Estate of Michael Jackson and drawn from more than one hundred hours of behind-the-scenes footage, featuring Jackson rehearsing a number of his songs for the show. Audiences will be given a privileged and private look at Jackson as he has never been seen before. In raw and candid detail, Michael Jackson’s This Is It captures the singer, dancer, filmmaker, architect, creative genius and great artist at work as he creates and perfects his final show. Directed by Kenny Ortega, who was both Michael Jackson’s creative partner and the director of the stage show.

Tags: Buy Online, Michael Jackson, This is It