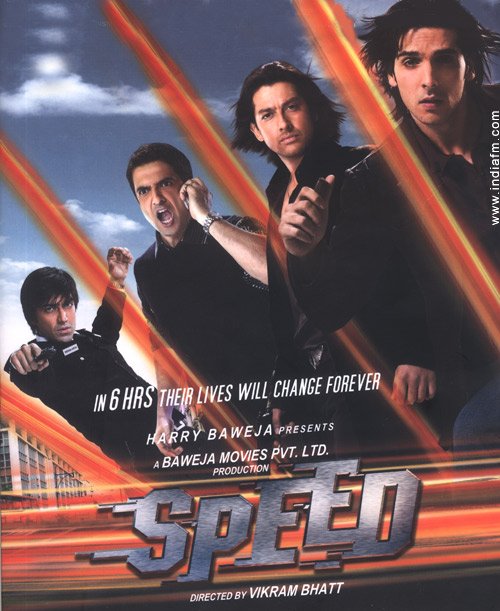 What do you do when you get a phone call from a stranger begging you to save her life? What would you do if your only ray of hope is your phone? Would you sacrifice your love to save somebody’s child? Speed answers these questions in a dramatic way. It’s a great mix of mystery, action and comedy, on the beautiful backdrop of London. Zayed Khan comes to London to convince his girlfriend Tanushree Dutta to give him another chance to prove his love for her. Meanwhile, Sanjay Suri, an undercover MI5 agent, receives a CD from Aftab Shivdasani and his lady, Sophie Chaudhary, which contains the recording of his kidnapped wife, Urmila Matondkar, and is asked to follow the instructions. He asks his colleague Amrita Arora to crack the code and moves off. He’s completely confused about what’s happening. Soon he realizes that he is being used as a weapon to assassinate the PM of India on his London tour. As he is still not agreeing to plans, Aftab finally decides to kidnap his kid. Sanjay’s kidnapped wife, Urmila, starts trying to escape. Her only ray of hope is the telephone call she’s accidentally made to Zayed Khan He’s in touch with her throughout the movie on his cell phone. Continuously talking with her and giving her moral support. As Zayed decides to help Urmila, his love of life, Tanushree gets annoyed and threatens to break up again. A happy-go-lucky brat Zayed, who never takes anything seriously, risks his own life to save an unknown family just because of a call. Aashish Chaudhary ? the super-cop of London is in charge of security of the visiting Prime Minister. But as his girlfriend has her birthday the very same day, Ashish is caught between his personal life and duty. He obviously chooses the later. Speed deals with many different characters and their lives on a parallel ground. It’s a story of how lives of unknown people get intermingled during this crisis. Will Aftab and Sophie succeed in their sinister plans? Will Zayed be able to save Urmila and get back his love Tanushree? Will Urmila and her kid live another day just with the help of Zayed’s phone? Will Ashish be able to protect the life of the Prime Minister?