London, Oct 11 (Calcutta Tube) Australian singer Peter Andre has revealed he has a crush on Elizabeth Hurley because she smells nice.

The ‘Mysterious Girl’ singer, who has his own range of fragrances for men and women, admits he has admired the model-and-actress for several years and was even more impressed by her when they met a few years ago, reports list.co.uk.

‘I went to give her a kiss at Elton John’s White Tie and Tiara ball and thought, ‘Wow you smell sensational.’ I’ve fancied her since she was in ‘Austin Powers’ but she’s attached, sadly,’ said the singer, who is currently single.

Made for British television, Act of Will focuses on three generations of women in a proud, indomitable family. Australian-born director Don Sharp brings to his soap-opera material the same energy and vitality that he’d previously lavished on such theatrical features as Kiss of the Vampire (1963) and Hennessy (1985). Since a portion of the production money was ponied up by Hollywood, American actor Peter Coyote is given a crucial role in the World War II sequences. Among the distaff cast members are the always welcome Jean Marsh (Upstairs, Downstairs), Victoria Tennant (the former Mrs. Steve Martin) and Elizabeth Hurley (who, as of this writing at least, is the girlfriend of Hugh Grant). Act of Will received its widest American exposure on public and cable television. 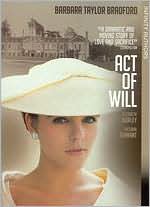