New Delhi, Oct 12, 2010 (Calcutta Tube) Bollywood star Salman Khan, who hosts reality show ‘Bigg Boss 4′, seems to be smitten by aspiring rock band Underground Authority as he has given them a chance to be associated with the show.

The band will perform in the ‘Aakhri Salaam’ special of the show every Saturday.

‘The appreciation that we received from Salman Khan during our performance in ‘India’s Got Talent Khoj 2’ was overwhelming. It feels great to perform on ‘Bigg Boss 4′,’ said Underground Authority in a statement.

‘We are practising day in and day out. We are really charged up to present our talent once again in front of Salman. Hope we will have a gala time performing, as much as the viewers will have watching the show. We are eagerly looking forward to it,’ the statement said.

The five-member band was a finalist in Colors’ reality show ‘India’s Got Talent Khoj-2’.

Romantic misunderstandings, unrequited love, and the gap between two very different cultures provide the backdrop for this romantic musical drama from India. Sameer (Salman Khan) is a gifted singer from Europe who has come to New Delhi to study Indian vocal techniques with Pandit Darbar (Vikram Gokhale). Darbar’s beautiful daughter Nandini (Aishwarya Rai) makes a strong impression on Sameer, and soon he’s head over heels in love. But everyone advises Sameer to stay away from the girl, and Nandini is set up in a marriage with Vanraj (Ajay Devgan), a successful lawyer. But Nandini isn’t happy with her new husband, and Vanraj soon finds evidence that his wife has been corresponding with Sameer, who has since returned to Europe. A jealous Vanraj packs his bags and sets out to find the singer, wanting to know the nature of the relationship between him and Nandini. With top “Bollywood” star Salman Khan in the lead, Hum Dil De Chuke Sanam was a major box-office success in India, and was enthusiastically received in screenings at the 2000 Vancouver Film Festival and 2000 Seattle Film Festival. 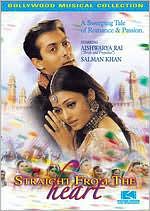