‘Indian classical music is clearly going through a tough phase, but I’d like to believe it’s temporary. We must also keep in mind that we are facing cultural aggression, especially due to television channels and many other mediums…,’ Khan told IANS in an interview.

Khan, whose birthday was Oct 9, wants to make sarod as popular as guitar. He also says his sons Amaan and Ayaan are on the right track as they carry forward the family’s musical tradition.

Excerpts from the interview:

Q: Khan Sahib, 65 years of a life well-lived. How do you look back on the years that have rolled by?

A: I am very grateful to god that people have accepted me at every age and stage of my life, with whatever I had to offer with love and encouragement.

[ReviewAZON asin=”B000QZZ0AY” display=”inlinepost”]Q: What would you say has been the most significant happening in this remarkable existence?

A: I think the birth of my sons Amaan and Ayaan in my life has been the most beautiful moment and that they have been accepted by the world. They have carried forward the musical torch of my family along with my disciples.

Q: You have taken sarod to an international level almost singlehandedly. Do you regret the absence of other equally distinguished players of sarod?

A: I do miss all the great fellow musicians who partnered in my journey to make sarod popular in the world. I feel their absence in every great music festival in India, which also includes my father, Ustad Haafiz Ali Khan.

Q: Classical Indian music is today at crossroads. What do you think of its future? Do you think classical maestros in our country are given their due?

Q: All over the world and India included, people have great reverence and love for Indian classical music. It is clearly going through a tough phase but I’d like to believe it’s temporary. We must also keep in mind that we are facing cultural aggression, especially due to television channels and many other mediums which have shaken India’s flavour of tehzeeb, tameez, sharam aur layhaaz. An artist who is loved by the nation is getting his due, the rest is in the hands of god. The struggle exists everywhere.

Q: Hindi film music has always been the eclipsing factor for classical music. How far do you approve of popular Indian musical styles, especially film music?

A: Historically, every Indian grew up listening to film songs; in fact, it’s always been a very integral part of every Indian’s life. However, Bollywood culture was never the face of India as there was so many other aspects that country has to offer. The evolution of film music has been very phenomenal. Some great works are happening now.

Q: Do you have any unfulfilled dreams?

A: I along with my sons have been on a journey to make sarod as popular as guitar or violin in the world. Lots more work has to be done. It’s a long journey. Presently, I am enjoying my role as a composer, composing concertos and doing collaborations. Something I stayed away from in the earlier part of my career!

Q: What do you feel about the recognition, specially national awards, given to stalwarts of the cultural realm such as you?

A: Though the love of people matters the most, any award is encouraging to an individual as an acknowledgment of his work. I am very happy to see that a sportsman is given awards while they are young; which is the right age and right time. Unfortunately in the creative field you have to become 80 years old to get any award! I feel the youth in all fields must be encouraged.

Q: Finally, Khan Sahib, the one component of the Indian reality that you would like to change?

A: I think we need to be a lot more progressive as a nation. We must have courage of conviction and not care about ‘log kya kahaingay’ (what people will say). As Tagore writes in his song ‘Ekla cholo re’ (you walk alone). 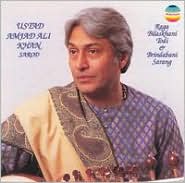 This album, and its companion, come from a morning concert at the Kufa Gallery in London in January 1994. Amjad Ali Khan is in exceptional form, supported by Sukhvinder Singh Namdhari on tabla and Gurdev Singh on tanpura.