Mumbai, Oct 11, 2010 (Calcutta Tube) It’s finally happening. Akshay Kumar is all set to turn DJ at the the retro music-and-dance night at suburban retro club Polyster and will play all his favourite songs from the 1970s as part of the promotional campaign for ‘Action Replayy’.

Akshay has already selected his favourite 1970s songs but he is not willing to reveal the chosen playlist.

But filmmaker Vipul Shah reveals a little more. ‘A lot of the songs Akshay has selected are from Rajesh Khanna films. So, we can expect a lot of R.D. Burman tracks.’

Akshay has been calling up DJs of two prominent night-spots in Mumbai to understand how to conduct himself in the evening. Wife Twinkle Khanna would be looking into Akshay’s look and wardrobe — in the 1970s’ retro style like in the movie in which he is paired opposite Aishwarya Rai.

Said Akshay: ‘I don’t think any Indian actor or any actor anywhere has been a DJ at a night spot before. I’m quite excited.’

The doors at the club will be open to all initially but closed after the place fills up.

Said Vipul Shah: ‘After all, not too many youngsters would’ve the chance to get Akshay to play DJ while they dance. I suspect after a while there will be a stampede in there.’

The retro Saturday night would, however, be sadly incomplete without Akshay’s leading lady Aishwarya, who has gone to the Pusan Film Festival.

Vipul Shah explained his leading lady’s absence on the important night. ‘The retro-music night was to happen on September 30. But that turned out to be the date for the Ayodhya verdict. When now Aishwarya has committed her time for such an important international festival, I can’t expect her to set aside her plans. And she has promised she would try to fly back to Mumbai for the evening and then return to Pusan.’

Akshay, however, is reconciled to his solitary star appearance as a DJ though he will now be accompanied by Aditya Roy Kapoor, the veejay turned actor who plays Akshay and Aishwarya’s son in ‘Action Replayy’. 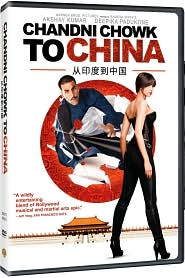